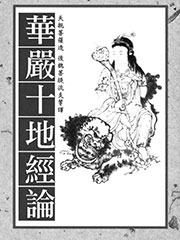 The Ten Stages Sutra (Sanskrit Daśabhūmikasūtra-śāstra, Dasabhūmikabhāsya; Chinese 十地經論, 十地論, 地論; pinyin shi di jing lun; also known as the Sutra on the Ten Stages) is an influential Mahayana Buddhist scripture written by Vasubandhu in Sanskrit and translated into Chinese by Bodhiruci and others during the 6th century.

Supposedly, a Daśabhūmikā sect arose in China at one time, centered on this sutra, but was later absorbed by the Huayan school. The Huayan school continues to study and propagate the Ten Stages Sutra as part of the Avataṃsaka Sūtra.