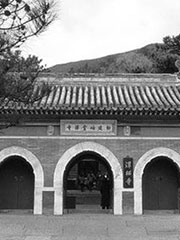 Tanzhe Temple (Chinese: 潭柘寺; Hanyu Pinyin: Tán Zhè Sì; literally «Temple of Pool and Zhe Tree)») is a Buddhist temple situated near China National Highway 108 to the west of Beijing. It is relatively well-known in Beijing. At one time, it was one of the most important temples in the nation.

Built in the Jin Dynasty, it has an age of around 1,600 years, existing before the settlement of Beijing. The area of the entire temple is 100 mu (6.8 hectares), and its arrangement of halls is akin to that found in the Ming and Qing dynasties.

The temple’s central hall is its Mahavira Hall. 24 metres in length, 33 metres wide, and with a depth of 20 metres. Buddhist monks regularly perform chanting here, to the accompaniment of woodblocks, cup gongs, and bells.

Tanzhe Temple also has some other features. The bed of its former Dragon Pool, which has dried up sits on the hill at the back of the temple. The zhè trees (Cudrania tricuspidata), now few in number, are located in the temple as well. Their number has dwindled shockingly from the original thousand or so. There are also persimmon trees, as well as a stand of bamboo.

The township of Tanzhesi owes its origins to Tanzhe Temple. Recently, the tourist industry has expanded it. 潭柘寺