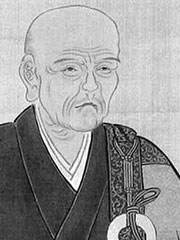 In 1608 he was made abbot of the Daitoku-ji temple in Kyoto, Japan. According to legend, he was the teacher of the most famous of all the Japanese swordsmen, Miyamoto Musashi. According to history, he communicated with such major figures as the powerful general, Ishida Mitsunari, the Christian daimyo named Kuroda Nagamasa, Yagyuu Munenori, the head of the Yagyū Shinkage-ryū of swordsmanship, the abdicated emperor called Go-Mizunoo, and the shogun, Tokugawa Iemitsu. He exerted himself to bring the spirit of Zen Buddhism to many and diverse aspects of Japanese culture, such as swordsmanship and calligraphy. His collected writings total six volumes, and his influence still permeates the work of many present-day exponents of Zen Buddhism and martial arts.

He is featured as a character in Vagabond, a manga series, which is largely based on Eiji Yoshikawa’s equally successful book, Miyamoto Musashi. Takuan Soho Soho Takuan 沢庵宗彭 Trạch Am Tông Bành