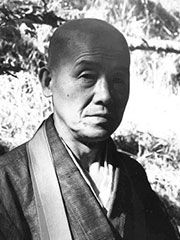 Sõen Nakagawa (1907 — 1984) was a Japanese teacher of Zen Buddhism in the Rinzai tradition. A highly creative and enigmatic figure, he was abbot of Ryutaku-ji monastery, an accomplished poet, and was a notable influence on the transmission of Zen to America. He was a student of Gempo Yamamoto and Keigaku Katsube, and was a dear friend of Nyogen Senzaki.