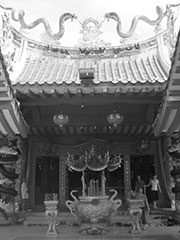 The Snake Temple (Chinese : 蛇廟) is situated in the small town of Bayan Lepas in Penang and is perhaps the only temple of its kind in the world. The temple is filled with the smoke of burning incense and a variety of pit vipers. The vipers are believed to be rendered harmless by the sacred smoke; but just for good measure, the snakes have also been de-venomed. Local devotees believe that the temple’s snake population has come there of its own accord.

The temple was built in about 1850 in memory of Chor Soo Kong – a Buddhist monk who moved to Penang. The statue of the deified healer was brought to Penang by a monk from China. The legend is that this pious monk gave shelter to the snakes of the jungle; when the temple was completed, the snakes moved in. The Snake Temple was originally named the «Temple of the Azure Cloud» in honor of the beauty of Penang’s sky.

Believers from as far away as Singapore and Taiwan come to pray in the temple on Chor Soo Kong’s birthday (the sixth day of the first lunar month).