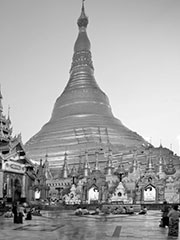 Rudyard Kipling described his 1889 visit to Shwedagon paya ten years later in From Sea to Sea and Other Sketches— Letters of Travel vol. 1 (1899). See External Links below for full text.