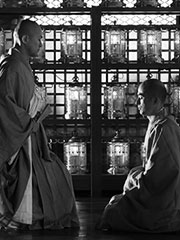 Shinnyo En is a form of Buddhism established in Japan. It is a sub-school of Vajrayana, which is the esoteric branch of Mahayana Buddhism. There are three major forms of esoteric Buddhism in Japan, including Shingon, Tendai, and Shinnyo En. Shinnyo En is unique in that is has sesshin meditation training, powers of bakku daiju, and is the form of esoteric practice that is open to lay practitioners. Shingon and Tendai teachings are ultimately only available for practice by monks, whereas Shinnyo En practice is open to all.

The Founder, Shinjo Ito, was a Shingon monk prior to establishing the Shinnyo En tradition in 1936. Shinnyo En was established in Japan, but has temples and meeting places in many countries. There are several temples in the United States, including San Francisco, Los Angeles, Seattle, Chicago, and New York. The temple in Chicago is the largest Buddhist temple in the United States.