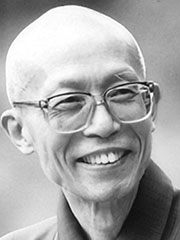 He has been teaching in the United States since 1980, and has also visited many countries in Europe, as well as continuing his teaching in several Asian countries, in particular Taiwan. In this way his work has helped to bridge East and West and convey the Dharma to the West. Sheng-yen has given dharma transmission to several of his lay Western students, such as John Crook.