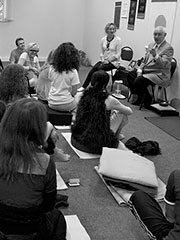 Shambhala Training is presented in a series of weekend programs, the first five of which are called «The Heart of Warriorship» and the latter seven, «The Sacred Path».

The Vajrayana Seminary is a two-part seminary designed to deepen students’ practice and understanding of the buddhist and Shambhala teachings and to enter them into the vajrayana practices of the Shambhala Buddhist mandala. The seminary lasts two months. Part 1, Sutrayana Seminary, is led by a Shambhala acharya and provides in-depth training and study of the hinayana, mahayana, and Shambhala teachings. Part 2, Vajrayana Seminary, is led by Sakyong Mipham Rinpoche and authorizes students to begin their Shambhala ngöndro—the preliminary practices for receiving the Rigden Abhisheka.