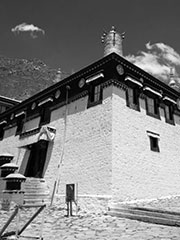 Sera Monastery is one of the ‘great three’ Gelukpa university monasteries of Tibet.

The other two are Ganden Monastery and Drepung Monastery

The original Sera monastery is in Lhasa, Tibet.

It was founded in 1414, by Jamchen Chojey (Sakya Yeshe), a disciple of Tsong Khapa.

Like the Drepung and Ganden monasteries, it had three colleges:

After the Chinese annexation of Tibet and the subsequent exodus of Tibetan monks to India, Sera monastery was reformed in Bylakuppe, India, near Mysore. Because none of the monks of the Ngagpa Dratsang (Tantric College) survived the invasion, only the Sera Mey College and Sera Jey College were reformed in India. Sera Monastery is still standing in Tibet, and once again houses some Tibetan Buddhist monks.

Graduates of Sera Jey College who are known in the west include:

Graduates of Sera Mey college who are known in the west include: