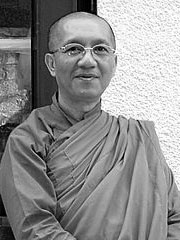 The word Nikaya is Pali and literally means «volume». It refers to the sections of the Tipitaka. However, an alternate usage is practiced in South-East Asia, in which the word «Nikaya» is a respectful term for a monastic community.

From the 13th to the middle of the 19th century, Bengali Buddhism underwent its own «Dark age». In this time, much cross-over between Hinduism and Buddhism occurred, such that Hindu deities such as Siva, Lakshmi, and Durga were worshipped by Buddhists, as Buddhist deities. This went so far as to include animal sacrifice, at the time an acceptable practice in Hinduism.

Moreover, the rules of the Vinaya began to be re-interpreted and the canonical text itself more or less fell by the wayside. Monks were commonly involved in leading a household life, having families, and even serving as «matchmakers». It was under these conditions that the Sangharaj of Myanmar, Saramitra Mahasthabir, inaugerated his reform movement in the 19th century.

Nine years later, in 1864, the Sangharaj returned to Chittagong at the invitation of Bengali monks. Arriving with an entourage of his own students, the Sangharaj began his reform movement within the Sangha. He chastised monks for following practices that the Vinaya clearly outlaws, such as animal sacrifice, using of money, maintaining a family, drinking alcohol, and eating food (especially meat) not offered. He also attacked the practice of ordaining monks below the age of 20 — full ordination is only available to those over the age of twenty. Likewise, he attacked the laxity in the order which allowed those who clearly were not suited to the religious life to remain.

This movement to re-ordain under the auspices of a «Buddhist Reformation» marked the beginning of what has now become the Sangharaj Nikaya. Saramitra Mahasthabir performed upasampada for a group of seven monks at Pahartali-Mahamuni, and this initial group of eight began to rapidly expand.