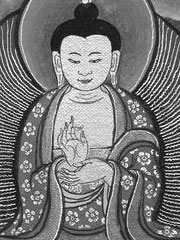 The Trikaya doctrine (Sanskrit, literally «Three bodies or personalities»; 三身 Chinese: Sānshén, Japanese: sanjin) is an important Buddhist teaching both on the nature of reality, and what a Buddha is. By the 4th century CE the Trikaya Doctrine had assumed the form that we now know. Briefly the doctrine says that a Buddha has three ‘bodies’: the nirmana-kaya or created body which manifests in time and space; the sambhoga-kaya or body of mutual enjoyment which is an archetypal manifestation; and the Dharma-kaya or ‘Reality body’ which ’embodies’ the very principle of enlightenment.