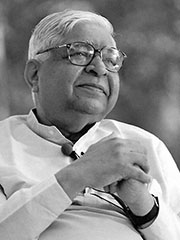 Goenka argues, «The Buddha never taught a sectarian religion; he taught Dhamma — the way to liberation — which is universal.» Therefore, he views his own teachings as «totally non-sectarian» and open to people of all faiths. The technique involves adherence to a moral code, in order to quieten the mind so that it can be controlled, can be concentrated. This enables the main part of the practice, detached observation of the reality of the present moment as it manifests in one’s own mind and body.