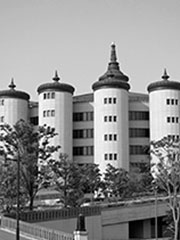 Risshō Kōsei Kai (立正佼成会; until June 1960, 大日本立正交成会: Dai-Nippon Risshō Kōsei Kai) is a Japanese Buddhist lay movement and an offshoot of the Nichiren-Buddhist Reiyūkai. One of its co-founders, Nikkyo Niwano (庭野日敬: Niwano Nikkyō, 1906–1999), was an observer at the Second Vatican Council and active in the peace movement. The other co-founder, Myōkyō Naganuma (長沼妙佼: Naganuma Myōkyō) passed away in September 1957. Niwano and Naganuma were prominent members of the Reiyūkai, another Japanese lay-Buddhist organization which, though a borrower of certain Nichiren Buddhist practices, was never formally affiliated with any particular traditional school.

The organization began in 1938 and its name means «society for righteousness and friendship.» It is known for hosting the Niwano Peace Prize and it has been a strong advocate for religious pluralism. Its current president, Nichiko Niwano (1938–, Nikkyo’s eldest son), is on good terms with the leaders of several religions, particularly Christian groups.

The movement has nevertheless faced criticism. Detractors have alleged that it is too strongly linked to Japan’s Liberal Democratic Party and that it supported Japanese militarist elements in WWII. There is also criticism, specifically Buddhist in nature, concerning its practice of fortune telling and ancestor worship and of its considering founder Niwano to be an important incarnation. Critics also see the massive estate left by Niwano as a sign of un-Buddhist materialism.

Rissho Kosei Kai experienced its most rapid growth before 1950, but some sources still place it as having around 5,000,000 adherents. According to the Japanese article, it is Japan’s second-largest religious organization. It claims some 1.81 million member-households (as of 31 December 2004), 239 churches in Japan, and seven churches and six activity centers worldwide ex-Japan.