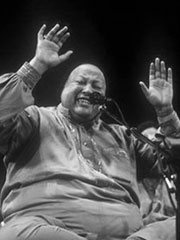 Qawwali (قوٌالی) is the devotional music of the muslim Sufis. Originally performed mainly at Sufi shrines throughout what is now India and Pakistan, it has also gained popularity in the mainstream, especially through the work of artists like Nusrat Fateh Ali Khan. Qawwali is a vibrant musical tradition that stretches back more than 700 years.

The roots of Qawwali can be traced back to 8th century Persia. However, Qawwali in the form we know it today was essentially created by Amir Khusrau in the late 13th century in India.

During the first major migration from Persia, in the 11th century, the musical tradition of Sama migrated to the Indian Sub-continent, Turkey and Uzbekistan. Rumi and his Mevlana order of Sufism have been the propagators of Sama in Central Asia. Amir Khusrau of the Chisti order of Sufis is credited with fusing the Persian and South Asian musical traditions, to create Qawwali as well as the Hindustani classical music tradition. The word «Sama» is used (or is the preferred name) in Central Asia and Turkey, for forms very similar to Qawwali. And even in India and Pakistan, the formal name used for a session of Qawwali is «Mehfil-e-Sama«.

The songs which constitute the qawwali repertoire are mostly in Urdu and Punjabi (almost equally divided between the two), though there are also songs in Persian, Brajbhasha, Siraiki and Sindhi. The poetry is implicitly understood to be spiritual in its meaning, even though the lyrics can sometimes sound wildly secular, or outright hedonistic. The central themes of qawwali are love, devotion and longing (of man for the Divine).

Qawwalis are classified by their content into several categories:

Composition of a qawwali party

A group of qawwali musicians, called a party, typically consists of eight or nine men including a lead singer, one or two side singers, one or two harmoniums (which may be played by lead singer, side singer or someone else), and percussion. If there is only one percussionist, he plays the tabla and dholak, usually the tabla with the left hand and the dholak with the right. Often there will be two percussionists, in which case one might play the tabla and the other the dholak. There is also a chorus of four or five men who repeat key verses, and who aid and abet percussion by hand-clapping.

The performers sit in two rows — the lead singer, side singers and harmonium players in the front row, and the chorus and percussionists in the back row.

Before the fairly recent introduction of the harmonium, qawwalis were usually accompanied by the sarangi. The sarangi had to be retuned between songs; the harmonium didn’t, and was soon preferred.

Qawwalis tend to begin gently and build steadily to a very high energy level in order to induce hypnotic states both among the musicians and within the audience. Songs are usually arranged as follows:

The singing style of qawwali is different from Western singing styles in many ways. For example, in words beginning with an «m», Western singers are apt to stress the vowel following the «m» rather than the «m» itself, whereas in qawwali, the «m» will usually be held, producing a muted tone. Also in qawwali, there is no distinction between what is known as the chest voice and the neck voice (the different areas that sound will resonate in depending on the frequency sung). Rather, qawwals sing very loudly and forcefully, which allows them to extend their chest voice to much higher frequencies than those used in Western singing, even though this usually causes a more noisy or strained sound than would be acceptable in the West.