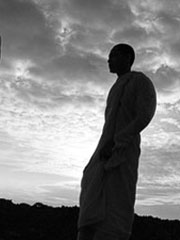 He visited China during the Tang dynasty, and contributed several important translations of Sanskrit sutras into Chinese. Some of his main works are:

Prajñā reportedly befriended the Japanese monk Kukai, future founder of the Shingon sect of Buddhism, during his pilgrimage to China. He is said to have helped Kukai learn and understand Sanskrit source texts.