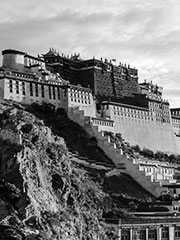 The Potala Palace (Tibetan: པོ་ཏ་ལ, Mandarin: 布达拉宫), located in Lhasa, Tibet, was the chief residence of the Dalai Lama until the 14th Dalai Lama fled to Dharamsala, India after a failed uprising in 1959. Today the Potala Palace is a state museum of China. It is now a popular tourist attraction and an UNESCO World Heritage Site.

The site was used as a meditation retreat by King Songtsen Gampo, who in 637 built a first palace there, which was incorporated into the later buildings. The construction of the present palace began in 1645 under the fifth Dalai Lama Lozang Gyatso. In 1648, the Potrang Karpo (White Palace) was completed, and the Potala was used as a winter palace by the Dalai Lama from that time. The Potrang Marpo (Red Palace) was added between 1690 and 1694. The name Potala probably derives from Mt Potala, the mythological abode of Bodhisattva Chenrezig (Avilokiteshvara / Kuan Yin).

Built at an altitude of 3,700 m, on the side of Marpo Ri hill, the Red Mountain in the center of Lhasa Valley, Potala Palace, with its vast inward-sloping walls broken only in the upper parts by straight rows of many windows, and its flat roofs at various levels, is not unlike a fortress in appearance. At the south base of the rock is a large space enclosed by walls and gates, with great porticos on the inner side. A series of tolerably easy staircases, broken by intervals of gentle ascent, leads to the summit of the rock. The whole width of this is occupied by the palace.

The central part of this group of buildings rises in a vast quadrangular mass above its satellites to a great height, terminating in gilt canopies similar to those on the Jokhang. This central member of Potala is called the «red palace» from its crimson colour, which distinguishes it from the rest. It contains the principal halls and chapels and shrines of past Dalai Lamas. There is in these much rich decorative painting, with jewelled work, carving and other ornament.

The Potala Palace was inscribed to the UNESCO World Heritage List in 1994. In 2000 and 2001, Jokhang Temple and Norbulingka were added to the list as extensions to the sites.