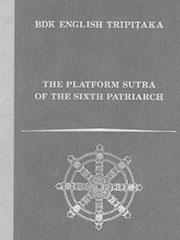 The Platform Sutra (more fully, the Platform Sutra of the Sixth Patriarch) is a Buddhist scripture that was composed in China. It is one of the seminal texts in the Chan/Zen schools. Centered on the discourse given at Shao Zhou temple attributed to the sixth and last Ch’an patriarch, Huineng. Some modern scholars seriously doubt the historicity of the claim that someone named Huineng wrote the text, but this does nothing to diminish the fact of its widespread influence. The key topics of the discourse are sudden enlightenment, the direct perception of one’s true nature, and the unity in essence of śīla, dhyāna and prajñā. The Southern Chan or «Sudden Enlightenment» school of Chan Buddhism based its doctrine on this extremely influential scripture. The Chinese title is :六祖壇經 or Liúzŭ Tánjīng (T 2008.48.346a-362b). The earliest extant version of the Platform Sutra, the Tun-Huang text, was translated into English by Philip Yampolsky.

In The Platform Sutra, Hui Neng instructs his accomplished disciples in the chapter on his Final Instructions, «After my entering Nirvana, each of you will be the Dhyana Master of a certain district. I am, therefore, going to give you some hints on preaching, so that you may keep up the tradition of our School.»

«First mention the three categories of Dharmas, and then the thirty six ‘pairs of opposites’ in the activities of the Heart-Mind. Then teach how to avoid the two extremes of ‘coming in’ and ‘going out.’ In all preaching, stray not from the Heart-Mind. Whenever someone puts a question to you, answer in the antonyms, so that a pair of opposites; will be formed, such as coming and going. When the interdependence of the two is entirely done away with there would be, in the absolute sense, neither coming nor going. Whenever a question is put to you, answer it in the negative if it is an affirmative one; and vice versa. If you are asked about an ordinary man, tell the questioner something about a sage; and vice versa. From the correlation or interdependence of the two opposites the doctrine of the Middle Way may be grasped. If someone asks what is darkness, answer thus: Light is the root condition and darkness is the reciprocal condition. When light disappears, darkness appears. The two are in contrast to each other. From the correlation or interdependence of the two the Middle Way arises.»