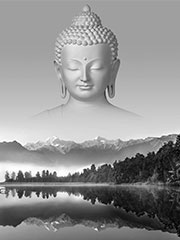 Although the Buddha was not represented in human form until around the 1st century CE (see Buddhist art), the Physical characteristics of the Buddha are described in one of the central texts of the traditional Pali canon, the Digha Nikaya, in the discourse titled «Sutra of the Marks» (Pali: Lakkhana Sutta) (D.iii.142ff.).

These characteristics comprise 32 signs, «The 32 signs of a Great Man» (Pali: Lakkhana Mahapurisa 32), and were supplemented by another 80 Secondary Characteristics (Pali:Anubyanjana). These traits are said to have defined the appearance of the historical Buddha, Siddhartha Gautama and have been used symbolically in many of his representations.