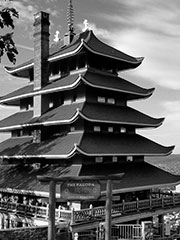 A pagoda is the general term in the English language for a tiered tower with multiple eaves common in China, Japan, Korea, Nepal, and other parts of Asia. Most pagodas were built to have a religious function, most commonly Buddhist, and were often located in or near temples. This term may refer to other religious structures in some countries. In Thailand, «pagoda» usually means the same as stupa while in Vietnam, «pagoda» is a more generic term referring to a place of worship.

According to Alain Rey’s Dictionnaire historique de la langue française (rev. ed. 1995), the word first appeared in French as pagode in 1545, meaning «temple of an Eastern religion» and deriving from a Portuguese word dated from 1516. The derivation is uncertain. Possible roots are the Dravidian pagodi or pagavadi, a name of Kali derived from the Sanskrit bhagavati («goddess»), and the Persian butkada («temple»).

According to Liang Ssu-Cheng’s A Pictorial History of Chinese Architecture (MIT Press, 1984), the word pagoda is derived from the Chinese 八角塔 (in pinyin, bā jiǎo tǎ, hence «pagoda»), meaning literally «eight-cornered tower.» Pagodas with an octagonal base were an extremely popular pagoda design in the late Ming Dynasty and early Qing Dynasty periods when Europeans were coming into contact with China.

«Pagoda – comes from Sanskrit «dhatu garba». From the harmika in the stupa, lies the anda (dome) or world egg. Here resides the sacred relic, with their dhatus (magic elements) which like the eggs, possess the power of life. The power of this womb and its world egg is transferred through the sacred altar that stands over the gharba (the womb), namely the harmika, and becomes a force for spiritual life and renewal. Therefore «dhatu» refers to the magical, sacred relics (i.e the Buddha’s) and «gharba» the womb. From dhatu gharba comes the Singhalese «dagoba». In Burma and other East Asian countries, the daoba becomes «pagoda».

In the 18th century, Chinoiserie, a style based on Chinese and other Far East designs became popular in Europe, introduced by the burgeoning trade and travel routes. An example of this is the pagoda in Kew Gardens, England, which was completed in 1762 as a gift for Princess Augusta, the mother of George III. In an unexpected twist, a «pagod» became the English name in the luxury trade for a porcelain figure of a Chinese seated god. The Sakyamuni Pagoda, built in 1056 is the tallest remaining wooden pagoda in the world.