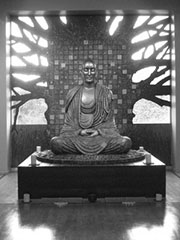 There are two main focus’s of worship at Padmaloka, the shrine room and the Stupa. The stupa contians some relics of Dhardo Rimpoche. Rimpoche was a teacher of Sangharakshita. It’s inscriptions read Cherish the Doctrine. Live United. Radiate Love — which was Dhardo Rimpoche’s moto.