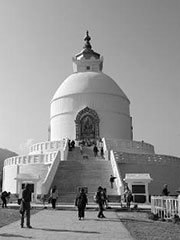 The community reveres the Lotus-Sūtra (jp: 法華経 Hokkekyō) as the highest expression of the Buddhist message. In addition it is actively engaged worldwide in the peace movement. The main practise of Nichiren Buddhism is to chant the Odaimoku or Namu Myo Ho Ren Ge Kyo.

Nipponzan Myōhōji is known in the west for its Peace Pagodas (Stupas) in Milton Keynes, England; Leverett, Massachusetts; and many other locations.