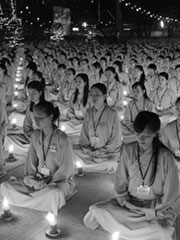 Many Western authors have used the term Hinayana to refer to Nikaya Buddhism. However, that term is now often seen as flawed on two levels. First, Hinayana, literally «inferior vehicle», is often regarded as an offensive or pejorative term and has never been used by Nikaya Buddhists to refer to themselves. Second, according to Mahayana and subsequent Vajrayana doctrine, «Hinayana» refers not to a sect or school of Buddhism but to a type of path to liberation which is contrasted with the path of the Bodhisattva. The term Shravakayana (literally, «the vehicle of hearers «) is sometimes substituted, but this meets only the first objection, and not the second. «Nikaya Buddhism», which appears to have been coined by Professor Masatoshi Nagatomi of Harvard University, is an attempt to find the most neutral and accurate way of referring to these schools. Note that nikaya is also a term used by Theravadins to refer to a school or sect.