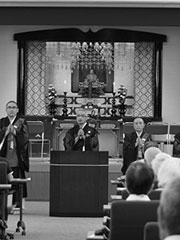 Nichiren Shu (日蓮宗: «Nichiren School») is the oldest of the Nichiren Buddhist sects. It is smaller and less well known internationally than Nichiren Shoshu or Soka Gakkai.

Nichiren Shu does not accept Nichiren Shoshu‘s claim that Nichiren designated Nikkō his successor. Doctrinally, Nichiren Shu states that Shakyamuni is the Buddha and Nichiren is merely his priest, not his divine reincarnation.

Nichiren Shu does not regard Nichiren as a Buddha as Nichiren Shoshu and Soka Gakkai do. Instead, Nichiren is seen as the votary of the Lotus Sutra fulfilling its prophecy in acting as the incarnation of Jōgyō («Superior Practice») Bodhisattva, who leads all bodhisattvas in propagating the Lotus Sutra. Shakyamuni Buddha is regarded as the Eternal Buddha as preached in the 16th chapter of Lotus Sutra. Nichiren Shu places Nichiren in a high position as the messenger of the Eternal Buddha Shakyamuni, but does not regard him as more important than Shakyamuni. Shakyamuni Buddha occupies the central role in Nichiren Shu; Nichiren—referred to as Nichiren Shōnin («Saint Nichiren»)—is the saint who refocused attention on Shakyamuni by rebuking other Buddhist schools for solely emphasizing other buddhas or esoteric practices.

This can be seen in the emphasis of training in Nichiren Shu. The Lotus Sutra is paramount in study and in practice, and Nichiren’s writings—called Gosho (御書) or Goibun (御遺文)—are seen as commentaries or guides to the doctrines of Buddhism. They include the Five Major Writings of Nichiren in which he establish doctrine, belief, and practice, as well as many pastoral letters he wrote to his followers.

Nichiren wrote frequently, and readers can verify or correct their understanding of the doctrines of Nichiren Buddhism through his surviving works. Unlike Nichiren Shoshu or Soka Gakkai, Nichiren Shu is far more selective about which Gosho it deems authentic. Many Gosho that are accepted by these two schools are not accepted as genuine by Nichiren Shu on grounds that scholars have not verified their authenticity.

Another difference of Nichiren Shu is the positioning in its doctrine and practices of the Odaimoku (the mantra Namu Myōhō Renge Kyō) and of the Mandala or Gohonzon. Nichiren Shu views these as the summit of the Dharma, but does not ignore other Buddhist practices. Forms of silent meditation (shōdai-gyō), artistic copying of the Odaimoku (shakyō), and the study of fundamental Buddhist concepts such as the Four Noble Truths and Taking Refuge survive in Nichiren Shu.

The Mandalas used by Nichiren Shu believers are often inscribed or based on Nichiren’s own works, but not by the high priest as is the case in Nichiren Shoshu. Nichiren Shu also does not accept the Dai-Gohonzon of Nichiren Shoshu, as it believes there is no evidence that Nichiren created any wooden Mandala or asked any one to do so on his behalf.

In Japanese society, Nichiren Shu is more mainstream than Nichiren Shoshu or Soka Gakkai in that it continues to have relationships with non-Nichiren Buddhist traditions. It also is the oldest of the Nichiren traditions and has access to Mt. Minobu (身延山: where Nichiren lived in seclusion and where he requested to be buried) and many of Nichiren’s most important personal artifacts. Though Soka Gakkai’s energetic evangelization allowed it to become the largest Nichiren Buddhist group in North America, Nichiren Shu has recently begun to ordain non-Japanese priests and to expand its presence in the West.