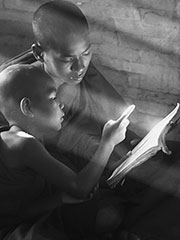 Ambedkarite Buddhists espouse an eclectic version of Buddhism, primarily based on Theravada, but with additional influences from Mahayana and Vajrayana. On many subjects, they give Buddhism a distinctive interpretation. Of particular note is their emphasis on Shakyamuni Buddha as a political and social reformer, rather than merely as a spiritual leader. They point out that the Buddha required his monastic followers to ignore caste distinctions, and that he lambasted racialist justifications for social inequality that existed in his own time. Ambedkar’s followers do not believe that a person’s unfortunate conditions at birth are the result of previous karma. In this respect, the Ambedkarites have some support from doctrinal sources. The Buddhist scriptures themselves do not teach that birth into a high social position is a sign of merit, and the Ambedkarite interpretation has been defended by reference to the various Suttas in which the Buddha teaches that some are born into high social position «Only for their own destruction, as a hollow tree grows high only to crumble down», etc. Conversely, many orthodox Buddhists are profoundly uncomfortable with some of the liberties Ambedkar took in «Quoting» the Buddha —such as re-fashioning the four noble truths to have a direct social message.