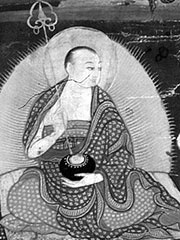 Nanda was a half-brother of the Buddha, the son of Suddhodana and Mahaprajapati. He had a reputation as a handsome man, and was going to be married to Janapadakalyani, when the Buddha enticed him to become a monk on the day of his wedding. Nanda had to abandon his bride-to-be in order to follow the Buddha, a scene which is often represented in Greco-Buddhist art.

Nanda was deeply tormented by his renunciation, and the Buddha had to take him to the heaven of the 33 gods, where they met with heavenly nymphs under the king of the gods, Sakra. The Buddha promised one of the nymphs to Nanda if he persevered with the life of a monk. Nanda agreed and he became an arhat.

Nanda was very beautiful, and was only four inches shorter than the Buddha. He once wore a robe made according to the dimensions of the Buddha’s robe. Discovering this, the Buddha chided him for his presumption.

The story of Nanda appears in a number of versions, including the poem Saundarananda by Aśvaghoṣa.