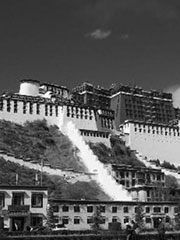 An American branch of the above, founded 1992 in Ithaca, New York. Its several monks (rotated in and out from Dharamsala) teach a several-year curriculum in «sutra and tantra,» including Tibetan language, to a clientele consisting predominantly of Western dharma students. In addition it sponsors various lectures, short courses, and retreats. Its full name is «Namgyal Monastery Institute of Buddhist Studies.»