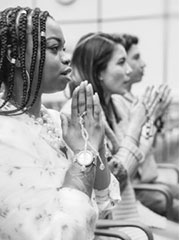 Nam Myōhō Renge Kyō (南無妙法蓮華経, also transliterated Namu Myōhō Renge Kyō) is a mantra that is chanted as the central practice of all forms of Nichiren Buddhism. The mantra is referred to as daimoku (題目, «title») and was first «revealed» by the Japanese Buddhist teacher Nichiren on the 28th day of the fourth lunar month of 1253 ce at Kiyosumi-dera (also, Seichōji) near Kominato in current-day Chiba, Japan. The practice of chanting the daimoku is called shōdai (唱題).

The phrase is somewhat difficult to render into English because each word or set of words contains a complex set of symbolism and connotation, and without an understanding of the symbology behind the words, the full meaning is lost.

As Nichiren explained the mantra in his «Ongi Kuden» (御義口伝), a transcription of his lectures on the Lotus Sutra, Namu or Nam (南無) derives from the Sanskrit namas, whereas Myōhō Renge Kyō is the Japanese pronunciation of the Chinese title of the Lotus Sutra in the translation by Kumarajiva (hence, daimoku).

Nam(u) is used in Buddhism as a prefix expressing the taking of refuge in a Buddha or similar object of veneration. In Nam(u) Myōhō Renge Kyō, it represents devoting or submitting onself to Myōhō Renge Kyō—the Lotus Sutra as, not merely a scripture, but the ultimate teaching of Buddhism, particularly as Nichiren intrepreted it: In Nichiren doctrine, the ultimate teaching changes according to one of three time periods, and is always called the Lotus Sutra for that particular period.

Broken down, Myōhō Renge Kyō consists of Myōhō (妙法), «Sublime» or «Mystic» Law, the Dharma underlying all phenomena; Renge (蓮華), the Lotus Flower, which blooms and bears seeds at the same time and therefore signifies the simultaneity of cause and effect, the «natural» law that governs karma; and Kyō (経, «thread passing all the way through a bolt of cloth», but also «scripture»), meaning a teaching of the Buddha. Kyō also connotes sound, such as that of voices, and some Nichiren Buddhists cite this as the reason that they pray using Nam(u)-Myōhō-Renge-Kyō as an invocation.

The seven characters na-mu-myō-hō-ren-ge-kyō are written down the centre of the Gohonzon, the mandala venerated by Nichiren Buddhists.

Precise interpretations of Nam(u)-Myōhō-Renge-Kyō, how it is pronounced, and its position in Buddhist practice differ slightly among the numerous schools and sub-sects of Nichiren Buddhism, but «I take refuge in (devote or submit myself to) the Lotus Sutra (i.e., the teaching of the Sublime (or Mystic) Law of the universe)» might serve as a universal translation. One school, Nichiren Shu, pronounces it Namu-Myōhō-Renge-Kyō exclusively and offers the translation «Adoration to the Scripture of the Lotus of the Perfect Truth». Another—the Soka Gakkai, a group derived from the Nichiren Shoshu school)—pronounces it primarily Nam-Myōhō-Renge-Kyō and likes «Devotion to the Mystic Law of Cause and Effect Sutra» as a translation.

Though Myōhō Renge Kyō has numerous English renderings, such as «The Scripture of the Lotus of the Perfect Truth», it is most commonly referred to as, simply, the Lotus Sutra.