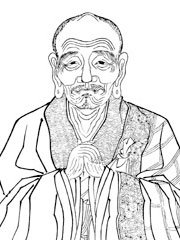 Mahākāśyapa (摩訶迦葉, Mohe Jiashe) or Kāśyapa was a brahman of Magadha, who became one of the principal disciples of Śākyamuni Buddha and who convened and directed the first council. Mahākāśyapa is one of the most revered of the Buddha’s early disciples. He is often depicted in statuary together with Ananda, each standing to one side of the Buddha.

According to the legendary history of the Chan and Zen schools, Mahākāśyapa recieved the Dharma directly from Buddha at the flower sermon on Vulture Peak, where Buddha silently held a flower before his students. A monk named Kāśyapa smiled. The Buddha remarked that Kāśyapa alone of all his students had recieved his teaching for that day, and should thereafter be known as Mahākāśyapa.