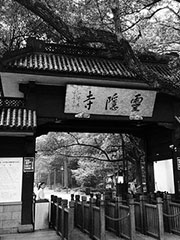 Lingyin Si (Chinese: 靈隐寺; Hanyu Pinyin: Língyǐnsì), commonly translated as Temple of the Soul’s Retreat is one of the largest and wealthiest Buddhist temples in China. It is located in Hangzhou, Zhejiang province.

It was originally founded in 326 AD, but has been rebuilt no less than sixteen times since then. The current buildings are modern restorations of late Qing buildings. The hillside to the south of the temple is also famous as a site of old Buddhist caves and rock carvings. Many of these date back to the time when the temple was first founded and a great many were carved during the blossoming of Buddhism during the Tang dynasty. Despite some damage inflicted by Red Guards during the Cultural Revolution, the temple and grounds escaped much of the wholesale destruction that other temples in China suffered because of the protection of Premier Zhou Enlai. Today the temple is thriving, though most of the thousands of visitors who come do so for sightseeing and not for religious reasons.

Lingyin Si is laid out along traditional lines. What makes the temple unique is its size, particularly the size of its principle buildings. The front hall, and former entrance, is the huge Hall of the Heavenly Kings (tianwangdian). This hall is a huge double-eaved building that is as large or larger than the main hall at many temples, at least 60 feet tall. The principle Buddha here is Maitreya or Milefo, the Laughing Buddha. He faces the front of the hall to the south to greet visitors who enter the compound. To the left and right are the four Deva Kings. These statues stand 30 to 40 feet tall and are newly painted. It is not clear if they are new or newly restored. The ceiling is ornately painted with phoenixes and dragons.

From here one enters a huge courtyard bounded by the Hall of the Heavenly Kings on the south, a group of shops and offices to the east, the Hall of the Five Hundred Arhats to the west, and the Main Hall to the north. The main hall is called the Mahavira Hall or Daxiongbaodian with its huge golden image of Shakyamuni. There are also huge images of the 18 Arhats, and the back of the hall has the traditional depiction of Guanyin and the 500 Arhats at Vulture Peak. It is triple-eaved and stands at least 120 feet high. The trees growing in the front courtyard make it almost impossible to capture the whole building in a single photograph.

Behind this hall and uphill is a newly built Hall for Bhaisajyaguru Buddha (yaoshidian), commonly called the Medicine Buddha. This was not part of the Qing dynasty temple, but was built last year as part of an expansion project. Another part of the project is the Hall of Five Hundred Arhats (wubailuohantang). This hall is laid out with a floor plan shaped like a Buddhist swastika and contains five hundred life-size bronze statues of the five hundred arhats. There is a statue of Guanyin in the center where the four arms of the swastika meet.