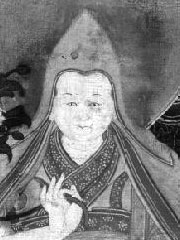 Kelzang Gyatso (Wylie: Bskal-bzang Rgya-mtsho) (1708 – 1757), also spelled Kelsang Gyatso and Kezang Gyatso was the 7th Dalai Lama of Tibet. He was born in Litang, in the GarzĂȘ Tibetan Autonomous Prefecture of present-day Sichuan province, and recognized as the new reincarnation thanks to a poem of the 6th Dalai Lama in which he said «After going to Litang I would not be late in returning».