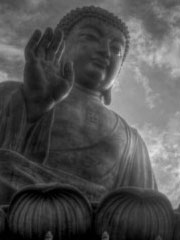 The Kalama Sutta (Sanskrit: Kalama Sutra) is a Buddhist sutta in the Anguttara Nikaya of the Tipitaka. In this sutta, Gautama Buddha instructs the people of Kesaputta — the Kalamas — on which basis one should decide which religious teaching to accept as true. The Buddha tells the Kalamas to not just believe religious teachings because they are claimed to be true by various sources or through the application of various methods and techniques. Even his own teachings are not to be accepted at face value.

The Buddha provides ten specific sources which should not be used to accept a certain teaching as true, without further verification:

Instead, he says, only when one has personally verified that a certain teaching is skillful, blameless, praiseworthy, and conducive to happiness, then one should accept it as true and practise it.

However, it should be stressed that the Buddha instructed the Kalamas to pay attention to the teachings of the wise; he did not simply leave it up to the individual to decide for him- or herself what is or is not the truth. Nevertheless, the emphasis remains on one’s personal verification of any teaching. More specifically, the verification pertaining to whether a particular teaching does indeed lead to the diminishment and non-arising of the mental defilements of greed, hate and ignorance, or vice versa (in which case it should be rejected).

The Kalama Sutta may also be interpreted as possibly presaging an approach to Pascal’s Wager for assessing beliefs in specific doctrines. In the sutta, the Buddha explicitly argues that there are direct and immediate benefits to be gained from acting as if the difficult concepts of rebirth and kamma are valid, regardless of whether they are valid. A decision-theoretic analysis seems to show that this argument renders belief in these concepts rational for all non-zero levels of belief.