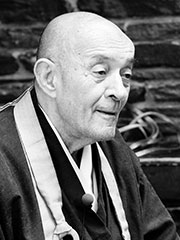 John Daido Loori, Roshi («Daido Roshi» for short), is an artist and first generation American Zen master. He is currently the abbot of Zen Mountain Monastery, located in the Catskill Mountains of New York. This monastery is also the mother-house of the Mountains and Rivers Order of Zen Buddhism, an American order founded by Loori in 1980.