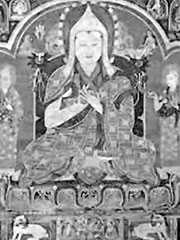 Tsongkhapa (Wylie transliteration: Tsong-kha-pa) (1357 — 1419) , whose name means «The Man from Onion Valley», was the founder of the Geluk (Dge-lugs) school of Tibetan Buddhism. He also known by his ordained name Lobsang Drakpa (Blo-bzang Grags-pa) or simply as «Je Rinpoche» (Rje Rin-bo-che).

Born in Amdo province of Tibet during 1357, Tsongkhapa received full lay ordination at the age of three from the 4th Karmapa, Rolpey Dorje (Rol-pa’i Rdo-rje), and was entitled «Kunga Nyingpo» (Kun-dga’ Snying-po). At the age of seven he took a second set of vows from Chöjey Dhondup Rinchen (Chos-rje Don-‘grub Rin-chen) and was entitled «Lobsang Drakpa» (Slob-bsang Graks-pa). It was to his credit then, that at such an early age, he was able to receive the empowerments of Heruka Chakrasamvara, Hevajra, and Yamantaka, three of the most prominent wrathful deities of Tibetan Buddhism, as well as being able to recite a great many sutras, not the least of which was Expression of the Names of Manjushri. Additionally, he would go on to be a great student of the Buddhist Vinaya, the doctrine of behaviour, and even later the Six Yogas of Naropa, the Kalachakra Tantra, and the acclaimed practice of Mahamudra.

«After I pass away
And my pure doctrine is absent,
You will appear as an ordinary being,
Performing the deeds of a Buddha
And establishing the Joyful Land, the great Protector,
In the Land of the Snows.»