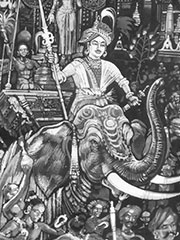 The Jatakas form a part of Buddhist canonical literature.They are popularly believed to be pearls of wisdom from the mouth of the Buddha himself.

India has always had a rich tradition of oral story telling and preachers from various religious sects have made extensive use of stories in their sermons. Buddha did so too. According to folklore, Buddha often cited examples from his past lives in order to explain the right conduct to his disciples. Since he told the stories according to a given situation, there was never a sequence to these stories. Therefore it is not known clearly when they were put together in a systematic form.

As of today, a total of 547 Jatakas are in existence. But there are indications that the actual number of Jatakas could be more. The Petlieik Pagoda at Pagan has representation of atleast 550 Jatakas. Some scholars believe that the latter figure could be due to the human tendency of rounding off figures. But popular belief is that the actual number was indeed 550 and the remaining three have been lost.

Most of the Jatakas are folklores that have been provided with a Buddhist touch. The Jatakas also have a version of the Ramayana which is called the Dasratha Jatakas, which portray Rama and Sita as brother and sister, instead of husband and wife. The Avadanas, which also form an important part of Buddhist literature, are also closely connected to the Jatakas. The fundamental difference between the two is that in the Jataka Bodhisattva is always one of the characters while any saint can play a part in the latter. This concept of Bodhisattva is central to the Jatakas. A Bodhisattva is a one who seeks Buddhahood through the systematic practice of the perfect virtues but also renounces complete entry into Nirvana until all other beings are saved. However there are many Avadanas, in which bodhisattva is the hero. Another text in Buddhist literature that derives heavily from the Jatakas is the Sanskrit work Jatakamala (meaning garland of birth stories) by Aryasura. A collection of 34 Jatakas, it is a work of high literary standards.

Jatakas tales embody the ethical system of Buddha’s insights into the natural laws that govern all existence. They form a cosmos of wisdom by themselves. At the heart of these stories lies the law of Karma which states, according to Buddhist philosophy,that every being becomes what he makes himself. Karma, here,does not stand just a synonym for action. It includes all the causal connections between actions and their consequences. The Buddha revealed the inner complexities of karma’s workings, and pointed out that one can, change the course of one’s life, by understanding the nature of karma,. He also taught that karma does not unfold in a simple manner with a single cause giving rise directly to a specific effect. The good do not always immediately prosper and the evil do not immediately pay for their sins. Yet, over many lifetimes, every one gets what he deserves. The Bodhisattva too achieved Buddhahood after he had accumulated enough good karmas over a period of many births.

Another key to Buddhism are the four noble truths. These are that there is suffering, that it has a cause, that it can be suppressed and that there is a way to accomplish this. These truths find their place in various Jatakas. The Buddhist doctrine of impermanence is shown in Garhita Jataka, Dasratha Jataka and the Bhuridatta Jataka among others.

The Jataka tales are a huge source of wisdom. They have had a profound influence over mankind since time immemorial and they find reflection not just in Indian literature, but also the literature of the whole world. The advent of the animal related stories as a significant genre in French literature during the middle ages was supposed to be inspired by the Jatakas.