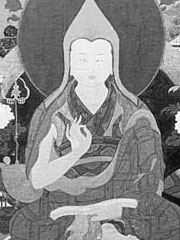 A number of wonders were reported in Jamphel Gyatso’s hometown at the time of his birth and the newborn boy will also be accustomed to taking a meditation stand, so the sixth Panchen Lama proclaimed that Jamphel Gyatso was the new Dalai Lama. At two and a half years of age, Jamphel Gyatso was solemnly brought to the Trashi Lümpo Palace in Shigatse, where he was recognized as the eighth Dalai Lama. For most of his time as the Dalai Lama, political power was exercised by the rulers.

In 1788, a conflict between Tibet and Nepal erupted and two years later, Gurkha troops invaded Tibet and conquered several Tibetan provinces. Shigatse and the Trashi Lümpo Palace were plundered, but in 1791 the Qing forces drove the Gurkha troops out of Tibet and in 1796 a peace treaty was concluded.