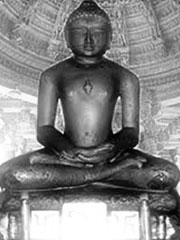 It has been advanced that the pervasive influence of Jain culture and philosophy in ancient Bihar gave rise to Buddhism.

The Buddhists always maintained that by the time the Buddha and Mahavira were alive, Jainism was already an ancient and deeply entrenched faith and culture in the region. Buddhist scriptures record philosophical dialogues between the wandering seeker Buddha and Udaka Ramaputta, who appears to have been a Jain teacher (having taught a doctrine of eight types of karma). Early Buddhists posited the existence of 24 previous Buddhas (Buddhas who walked the earth prior to Siddhartha Gautama, as established in the Buddhist text Mahavanso 1:100:1 among others) many of whose names are identical to those of the 24 Jain Tirthankaras and other traditional Jain figures. Buddhist scriptures attest that some of the first Buddhists were in fact Jains (Nirgranthas as they were then called, meaning «the unbonded ones») who «converted», whom Buddha encouraged to maintain their Jain identity and practices such as giving alms to Jain monks and nuns. The famous ancient parable of the blind men and the elephant illustrates the Jain science of Anekantavada, and is found in the Buddhist Pali text called Udana. Like any other splinter group, writers of the ancient Pali texts clearly rejoiced in criticizing (and at times ridiculing) the Jains and celebrating the conversion of another Jain to Buddha’s path. The texts show that Buddha vigorously appealed to the Nirgranthas that his path was nothing different from that with which they were already familiar, simply better.

The Buddhist formulation of the «Middle Way» may have been a post-Buddha response by the Buddhist monastic community to criticism by the Jains (as seen in Jain texts such as the Sutrakritanga Sutra and Acharanga Sutra) that the Buddhist Bhikkhus (mendicants) were lax and not living the rigorous life of a true ascetic or Shramana (Samana in Prakrit). In defining the Middle Way, Buddhist scholars branded their faith with a unique identity that distanced itself from Jain tradition by providing an alternative to «extreme asceticism» (i.e., Jainism) on one hand and Buddha’s own princely hedonism on the other. In describing Buddha’s six-years of spiritual searching after leaving his family, Buddhist scriptures from the early post-Buddha period detail certain fasts, penances and austerities which Buddha undertook whose descriptions are elsewhere found only in the Jain tradition (for example, the penance by five fires, plucking of hair, and the consumption of food using only one’s cupped hands). To this day, many Buddhist teachings, principles and terms remain identical to Jain ones. In short, a large body of evidence suggests vividly that, in large measure, Buddhism is an offshoot of Jainism.

As earlier mentioned, Buddhist scriptures maintain that the creed of the Nirgranthas (Jainism) was already a large and well-established faith — rather than a revolutionary or newly founded one — during the time of Mahavira. Buddhists recorded that Mahavira preached the «four-fold restraint» of the Nirgrantha tradition — a clear reference to the teachings of Mahavira’s predecessor Lord Parshva (877-777 BC), traditionally the 23rd Tirthankara — who propounded the four vows of Ahinsa (Ahimsa), Satya (truth), Aparigraha (non-possessiveness), and Asteya (non-stealing). Jain scriptures describe Mahavira himself as having been born to Jain parents (the nobles Siddharatha and Trishala of Kundagram). Additionally, the Buddhist Anguttara Nikaya scripture quotes the independent philosopher Purana Kashyapa (the sixth century BC founder of a now extinct order) as listing the Nirgranthas as one of the six major classifications of humanity — an unlikely distinction for a brand new faith. Mahāvīra and Buddha were, in fact, contemporaries, however there is no evidence of the teachers ever meeting. Robert S. Ellwood and Barbara A. McGraw comment, «Jainism was established in its historic form by Vardhamana, called Mahavira, an approximate contemporary of the Buddha in the fifth century B.C.E.» (Many Peoples, Many Faiths: Women and Men in the World Religions, New Jersey: Prentice Hall, 1999; page 110)