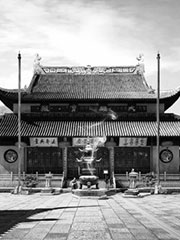 The Jade Buddha Temple (玉佛禅寺; yü fo ch’an ssu literally Jade Buddha Chan Temple) is a Buddhist temple in Shanghai, China. As with most modern Chinese Buddhist temples, the current temple draws from both the Pure Land and Chan traditions of Mahayana Buddhism. It was founded in 1882 with two jade Buddha statues imported to Shanghai from Burma by sea. These were a sitting Buddha (1.95 metres tall, 3 tonnes), and a smaller reclining Buddha representing Buddha’s death. The temple now also contains a much larger reclining Jade Buddha, donated from Singapore, and visitors may mistake this larger sculpture for the original, smaller piece.

During the rule of emperor Guang Xu in the Qing Dynasty (1875-1908), Hui Gen, an abbot from Mount Putuo went on a pilgrimage to Tibet via the two famous Chinese mountains Mount Wutai and Mount Emei. After Tibet, he arrived in Burma. Whilst there, Mr. Chen Jun-Pu, an overseas Chinese resident in Burma, donated five Jade statues of Buddha to Hui Gen, who transported two of them back to Jiang-wan, Shanghai. Here Hui Gen had a temple built with donated funds, and died shortly thereafter. This temple was occupied during the 1911 uprising, and the statues were moved to Maigen Road.

An Abbot by the name of Ke Chen later had a new temple built on land donated by a Mr. Shen. The construction took ten years, and lasted from 1918-1928. Ke Chen also invited Reverend Di Xian from Tian Tai mountain to come and lecture on Buddhism in a magnificent ceremony.

In 1956, a ceremony was held at the temple by the Shanghai Buddhist Association to celebrate the 2500th anniversary of Gautama Buddha’s enlightenment.

In 1966, during the cultural revolution, the monks made a living by selling handicrafts.

In 1983, Shanghai Institute of Buddhism was established at the temple under the Shanghai Buddhist Association.

In 1985, Monk Zhizhi Xuan and others made a trip to Dunhuang via Xinjiang. Shortly after their return regular scripture lectures, meditation and other features of temple life were resumed.

Also called the Great Hall, this hall contains many statues.

The Jade Buddha Chamber is in the northern section of the temple, on the second floor. A fee of 10 yuan is charged to ascend to it. Some additional Buddhist sculptures are also viewable in the antechamber.

The public restaurant is located on level two at the eastern edge of the temple and equipped with its own street entrance. Open daily, it serves a range of noodle dishes for five yuan per bowl, the most popular of which is ‘double mushroom noodles’ (双菇面). Other dishes are served at moderate prices.

The temple also contains a private restaurant for the use of monks and temple volunteers, which is at the western edge of the temple complex. There is a visitor services office adjacent to the southern entrance, and a Buddhist library is also on the premises.