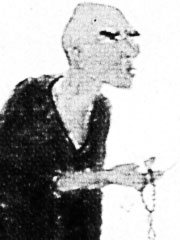 During a pilgrimage to Kumano (熊野), the kami deity enshrined there revealed to Ippen that enlightenment was determined by Amida Buddha (阿弥陀) and that Ippen should devote himself to preaching the importance of reciting the name of Amida, nembutsu (念仏). Ippen and a band of followers then travelled throughout the country proselytizing with their ecstatic nembutsu dance (nembutsu odori 念仏踊り), and won a wide following among common people. Other practices associated with the Ji-shu include scheduled sessions of chanting (hence the name time-sect), the handing out of slips of paper with the nembutsu written on them, and keeping a register of the converted.

Ippen’s insistence on constant travelling and giving up of family and possessions led to his nicknames: «Traveling Saint» (Yugyou Shounin 遊行上人) and «Holy Man of Renunciation» (Sute hijiri 捨聖).

Ippen’s doctrine was primarily influenced by Shoko, founder of the Seizan branch of the Jodo Shu, who «insisted that the various Buddhist practices contain no more than a portion of the merit of the single practice of the nembutsu and serve merely to lead people to recite the nembutsu.» However he was also strongly influenced by the non-dualism of Zen and even received inka (a seal of recognition) as a Zen Master from Roshi Kakushin.

Due to this Zen-influence, the Jodo Shinshu poet Harold Stewart argued that Ippen overlooked a necessary dynamic dualism between the defiled human being (bonbu) and the Buddha:

«It has recently been claimed that it was Ippen ‘who placed the lintel on the twin pillars erected by Honen and Shinran’ but this view seems untenable for several reasons. The foundation-stone of the Mahayana Metaphysic is nonduality, which requires a pair of terms that are one and at the same time two, for only thus can unity be transcended. To cope with this problem, Nagarjuna developed his Madhyamaka dialectic as a criticism of the inadequacy of both philosophical monism and monotheology. When such exponents of ultimate unity speak of the One, they should be asked the Zen question: ‘When the many are reduced to the One, to what then is the One reduced ?’ A possible Zen answer to this koan could be: ‘Mu!’-that is to say, ‘To None, to Nothing, to Emptiness’. But as this answer might be mistaken for nihilism, it would be safer to reply: ‘To the Not-Two’. Ippen Shonin’s saying: ‘In the invocation the invoker and the invoked are one’ shows the influence of Zen, but in this unity what then becomes of the very real difference between the pure Amida Buddha and the defiled human bonbu, who are worlds apart? To be effective in practice, the religious life requires a dynamic tension between these two opposites, the ki and the ho, the sentient being and the Dharma. In Ippen’s attempt to eliminate both Buddha and bonbu, so as to arrive at a ‘purer’ Nembutsu, he has merely succeeded in reducing nonduality to unity again.»

However, whether or not Stewart’s argument contains soteriological or practical truth, he overlooks the fact that Rennyo introduced the same Seizan doctrine of ki ho ittai (the unity of the individual and buddha) into the Jodo Shinshu after reading the (probably Seizan) text known as the Anjin Ketsujo Sho.

Before his death Ippen burnt all his writings, saying that «they have all become namuamidabutsu (devotion to Amida Buddha)», but copies were kept by some of his disciples. An English translation of his writings is No Abode: The Record of Ippen by Dennis Hirota (University of Hawaii Press / Ryukoku-Ibs Studies).

After Ippen’s death many of his disciples appear to have committed suicide, throwing themselves into the sea in the hope of being born in the Pure Land. Such phenomena perhaps help to explain the limited spread of the Ji-shu, and certainly the ecstatic fervor of the early Ji-shu seems to have mitigated against mainstream acceptance.

Ippen himself was greatly devoted to paintings of Shan-tao’s allegory of the White Path, so it is appropriate that his life led to the production of a great many portraits, sculpted images, and illustrated narrative scrolls (emaki 絵巻).