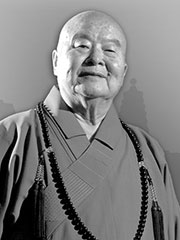 Humanistic Buddhism (Chinese: 人間佛教; Hanyu Pinyin: Rénjiān Fójiào) is a popular philosophy practiced mainly in Chinese Mahayana Buddhism. It is the integration of people’s spiritual practice into all aspects of their daily lives. Buddhist monastics such as Venerable Masters Yin Shun (印順導師) and Hsing Yun (星雲大師) pioneered the start of the propagation of Humanistic Buddhism.

Humanistic Buddhism encompasses all of the Buddhist teachings from the time of Gautama Buddha to the present. The goal of Humanistic Buddhism is the bodhisattva way, which means to be an energetic, enlightened, and endearing person who strives to help all sentient beings liberate themselves.

Humanistic Buddhism according to Hsing Yun

According to Venerable Master Hsing Yun, Humanistic Buddhism has the following six characteristics:

The Buddha was neither a spirit, coming and going without leaving a trace, nor was he a figment of one’s imagination. The Buddha was a living human being. Just like the rest of us, he had parents, a family, and he lived a life. It was through his human existence that he showed his supreme wisdom of compassion, ethical responsibility, and prajna-wisdom. Thus, he is a Buddha who was also a human being.

In his teachings, the Buddha placed great importance on daily life as spiritual practice. He provided guidance on everything, from how to eat, dress, work, and live, to how to walk, stand, sit, and sleep. He gave clear directions on every aspect of life, from relations among family members and between friends to how we should conduct ourselves in the social and political arenas.

The Buddha was born into this world to teach, to provide an example, and to bring joy to all beings. He nurtured all beings, for he always had the best interests of others in his mind and heart. In short, his every thought, word, and action arose from a heart filled with deep care and concern for others.

The Buddhist teachings give people joy. Through the limitless compassion of his heart, the Buddha aimed to relieve the suffering of all beings and to give them joy.

The Buddha was born for a great reason: to build a special relationship with all of us who live in this world. Although the Buddha lived some 2,500 years ago and has already entered nirvana, he left the seed of liberation for all subsequent generations. Even today, the Buddha’s ideals and teachings serve as timely, relevant guides for us all.

The entire life of the Buddha can be characterized by the Buddha’s spirit of wanting to liberate all beings, without exclusion.