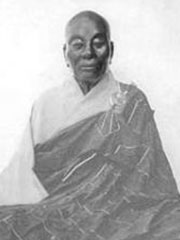 Huineng (慧能, 638 — 713) was a Chinese Chan (Chinese Zen) monastic who is one of the most important figures in the entire tradition. Huineng is the Sixth Patriarch of Chinese Chan Buddhism, as well as the last official patriarch. Since then, there are unofficial «patriarchs» of different lineages derived from Ch’an. In Japanese he is known as Daikan Enō.

He is said to have advocated an immediate and direct approach to Buddhist practice and enlightenment, and in this regard, is considered the founder of the «Sudden Enlightenment» (頓教) Southern Chan school of Buddhism. While these are the legendary accounts handed down by the tradition, it is widely understood that the actual history of the situation may have been quite different, to the extent that most believe that the primary work attributed to Huineng, the Platform Sutra of the Sixth Patriarch (六祖壇經), which ended up becoming one of the most influential texts in the East Asian meditative tradition, has no true association with him.

Huineng was born into the Lu family in 638 A.D. in Canton. His father died when he was young and his family was poor, so he did not have the chance to learn to read or write. One day, while he was delivering firewood to an inn, he heard a guest reciting the Diamond Sutra and he had an awakening. He immediately decided to seek the Way of Buddhahood. The guest gave him ten taels of silver to provide for his mother, and Huineng embarked on his journey. Thus began a remarkable page in Chinese Zen history.

After traveling for thirty days on foot, Huineng arrived at Huang Mei Mountain, where the Fifth Patriarch Hongren presided. He asked Huineng where he was from and what he sought. Huineng replied that he was seeking nothing else but Buddhahood.

Hongren then said that barbarians were from the south, therefore it may be difficult for him to achieve Buddhahood. Huineng counterreplied by saying that people may come from north or south, but the Buddha nature has no north or south.

From Chapter I of the Platform Sutra:

I then went to pay homage to the Patriarch, and was asked where I came from and what I expected to get from him. I replied, «I am a commoner from Hsin Chou of Kwangtung. I have travelled far to pay you respect and I ask for nothing but Buddhahood.» «You are a native of Kwangtung, a barbarian? How can you expect to be a Buddha?» asked the Patriarch. I replied, «Although there are northern men and southern men, north and south make no difference to their Buddha-nature. A barbarian is different from Your Holiness physically, but there is no difference in our Buddha-nature.»

Hongren immediately asked him to do chores in the rice mill. Huineng stayed to chop wood and pound rice for eight months.

One day, Hongren announced, «The question of incessant rebirth is a momentous one. Day after day, instead of trying to free yourselves from this bitter sea of life and death, you seem to go after tainted merits only (i.e. merits which will cause rebirth). Yet merits will be of no help if your Essence of Mind is obscured. Go and seek for Prajna (wisdom) in your own mind and then write me a stanza (gatha) about it. He who understands what the Essence of Mind is will be given the robe (the insignia of the Patriarchate) and the Dharma (the esoteric teaching of the Zen school), and I shall make him the Sixth Patriarch. Go away quickly.»

«Delay not in writing the stanza, as deliberation is quite unnecessary and of no use. The man who has realized the Essence of Mind can speak of it at once, as soon as he is spoken to about it; and he cannot lose sight of it, even when engaged in battle.»

However, the disciples said to each other that they didn’t need to write any gathas, and that surely their teacher and head monk, Venerable Shenxiu, would become the Sixth Patriarch. So only Shenxiu wrote a gatha for Hongren. The well-respected and learned head monk, ShenXiu, was under great pressure to produce a gatha that would qualify him as the next patriarch. He eventually decided to write a poem anonymously on the wall in the middle of the night, which stated:

The body is a Bodhi tree,
the mind a standing mirror bright.
At all times polish it diligently,
and let no dust alight.

However, privately, Hongren told Shenxiu, «You have arrived at the gate, but haven’t entered it. With this level of understanding, you still have no idea what the supreme bodhi mind is. Upon hearing my words, you should immediately recognize the original mind, the essential nature, which is unborn and unceasing. At all times, see it clearly in every thought, with the mind free from all hindrances. In the One Reality, everything is real, and all phenomena are just as they are.»

Hongren asked Shenxiu to compose another gatha that demonstrated true understanding. Shenxiu tried hard but couldn’t come up with another verse.

When a young novice passed the rice mill chanting Shenxiu’s gatha, Huineng immediatelyknew this verse lacked true insight. He went to the wall, and asked a district officer there to write a poem of his own for him. The officer was surprised, «How extraordinary! You are illiterate, and you want to compose a poem?» Whereupon Huineng said, «If you seek supreme enlightenment, do not slight anyone. The lowest class may have great insights, and the highest class may commit foolish acts.» In veneration, the officer wrote Huineng’s gatha on the wall for him, next to Shenxiu’s, which stated:

Bodhi is no tree,
nor is the mind a standing mirror bright.
Since all is originally empty,
where does the dust alight?

Huineng then went back to rice pounding. However, this gatha created a bigger stir;everyone was saying, «Amazing! You can’t judge a person by his looks! Maybe he will become a living bodhisattva soon!» However, when the alarmed Hongren came out, he just casually said, «This hasn’t seen the essential nature either,» and proceeded to wipe the gatha off with his shoe.

Hongren told Huineng, «If one recognizes the original mind, the original nature, heis called a great man, teacher of gods and humans, and Buddha.» He passed the robe and begging bowl as a symbol of the Dharma Seal of Sudden Enlightenment to Huineng.