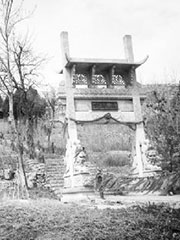 The nine mountain schools (九山; or gusan) were the initial monasteries of the Korean branch of Buddhism called Seon, founded in the Unified Silla period in the 8th or 9th century.

The initail transmission of Seon into Korea is usually attributed to Beomnang (法朗; fl. 632-646), said to be a student of the Chinese master Daoxin (道信; 580-651). Seon was later popularized especially by Sinhaeng (神行; 704-779) in the latter part of the eighth century and by Doui (道義; d. 825) at the beginning of the ninth century. From then on, many Koreans studied Chan in China and, upon their return, established their own schools at various mountain monasteries with their leading disciples.

The number of these schools was initially fixed to nine, whence the name derives. Eight of these schools were of the lineage of Mazu Daoyi (馬祖道一; 709-788), as they were established through connection with either him or one of his eminent disciples:

The ninth of these initial schools was the Sumi san (須彌山) school founded by Ieom (利嚴; 869-936), which had developed from the Caotong (曹洞) lineage.