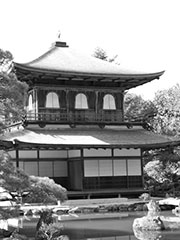 Ginkaku-ji (銀閣寺, Ginkaku-ji?), the ‘Temple of the Silver Pavilion,’ is a Buddhist temple in the Higashiyama District of Kyoto, Japan. The temple’s official name is Jishō-ji (慈照寺). It was built in 1474 by the shogun Ashikaga Yoshimasa, who sought to emulate the golden Kinkaku-ji commissioned by his grandfather Ashikaga Yoshimitsu.

The Kannon hall is the main building at the temple. It is popularly known as Ginkaku, the Silver Pavilion. The intention was to cover it in silver, but due to the increasing severity of the Onin War, which broke out several years earlier in 1467, construction was halted, and the silver covering never placed on the pavilion. The building, originally intended to be a monument to ostentation, is now taken as an example of Japanese refinement and restraint.

Like Kinkaku-ji, Ginkaku-ji was originally built to serve as a place of rest and solitude for the Shogun. During his reign as Shogun, Ashikaga Yoshimasa inspired a new outpouring of traditional culture, which came to be known as Higashiyama Bunka, the Culture of the Eastern Mountain. Having retired to the villa, it is said Yoshimasa sat in the pavilion, contemplating the calm and beauty of the gardens as the Onin War worsened and Kyoto was burned to the ground. In 1485, Yoshimasa became a Zen Buddhist monk, and after his death the villa became a Buddhist temple, renamed Jishō-ji.

Of all the temple buildings once standing, only the Silver Pavilion remains.

In addition to that building, the temple features wooded grounds covered with a variety of mosses, and a Japanese garden, supposedly designed by the great landscape artist Soami. The rock and sand garden of Ginkaku-ji is particularly famous, and a pile of sand said to symbolize Mount Fuji has now come to be a part of the garden.