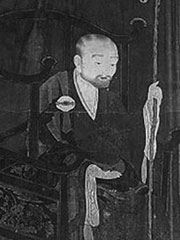 Gihwa, also known as Hamheo Teuktong (1376 — 1433) was a late Goryeo-early Joseon Buddhist monk of the Seon order, who was the leading Buddhist figure of his generation, also known as Hamheo. He was originally a Confucian scholar of the highest reputation, but he converted to Buddhism at the age of 21 upon the death of a close friend. He wandered among the Korean mountain monasteries, until he had the fortune of becoming the disciple of the last Korean National Teacher Muhak.