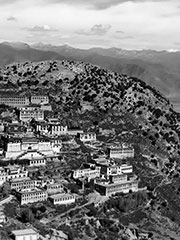 Ganden Monastery is one of the ‘great three’ Gelukpa university monasteries of Tibet, located on Wangbur Mountain, Tagtse County, 47 kilometers from Lhasa. Being the furthest from Lhasa of the three university monastaries, Ganden traditionally had a smaller population. However, it was the original monastery of the Geluk order, founded by Tsongkhapa himself, and traditionally considered to be the seat of Geluk administrative and political power.

The monastery has since been re-established in Karnataka, India by the Tibetan population in exile.

The other two great Gelukpa university monasteries are Sera Monastery and Drepung Monastery.