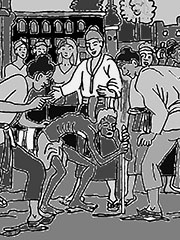 According to accounts of Gautama Buddha’s life, he led a sheltered existence as a prince surrounded by luxury and pleasure in his younger years.

One day he violated the king’s orders by sneaking out for an unannounced excursion outside the royal palace. There he saw the four sights that were his inspiration to become a monk: an old crippled man (old age), a diseased man (illness), a decaying corpse (death), and finally an ascetic.

Living in the Palace, with its inherent possessions would never give the freedom of the mendicant monk but would only cause a hindrance to the path of truth and freedom. He resolved to leave the Palace and become a mendicant monk, and live a meditative life, striving on, until He finds out the truth that causes suffering. This way, He can help everyone lead a peaceful and happy life. Determined to do that the Prince returned to the Palace.