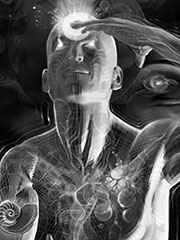 The Five Skandhas (Sanskrit: pañca-skandha, Pāli: pañca-khandha; literally: pañca, five; skandha, heap or bundle) are the five aggregates necessary to create an individual according to Buddhist phenomenology. In other words, a person is made up of the Five Skandhas, without which, there is no «self.»

«Form is emptiness, emptiness is form. The same applies to sensation, perception, mental formations, and consciousness.»

We can see in sutra form, an expounding of the Buddha’s doctrine of Anatman (No-self, No-I). Here the doctrine of the Five Skandha supports the concept of Anatman. For if there is «No-self», «No-I», then what experiences? The answer lies in the five skandha.

According to Chogyam Trungpa (1976, p.20-22), the five skandhas are «a set of Buddhist concepts which describe experience as a five-step process» and that «the whole development of the five skandhas..is an attempt on our part to shield ourselves from the truth of our insubstantiality,» while «the practice of meditation is to see the transparency of this shield.» (ibid, p.23)