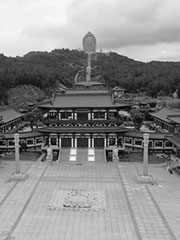 Donglin Temple (Chinese: 东林寺; Hanyu Pinyin: Dōnglínsì; literally «East Wood Temple») is a Buddhist monastery approximately 20km away from Jiujiang, Jiangxi, People’s Republic of China. It was built in 386 at the foot of Lushan by Hui Yuan, founder of the Pure Land Sect of Buddhism.

The monastery reached its peak of influence during the Tang Dynasty, but was severely damaged during the Taiping Rebellion and all but destroyed during the Republican period. It currently houses a small community of monks supported by a small farming village in its immediate vicinity.

Donglin Temple has been the first summer camp in China since the 1990s, relying on monasteries. The move was quite influential in the major monasteries and was eager to follow suit. This activity promotes traditional culture, spreads Buddhist thoughts, strengthens moral education, enlightens the youth’s mind, and achieves the off-campus classroom and important supplements of youth ideological education, providing a harmonious society construction, moral reconstruction and future national development. The irreplaceable positive energy is deeply eagerly awaited and welcomed by the people of insight, ideological educators and the youth.