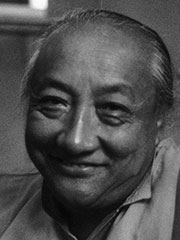 After completing his retreat at the age of twenty-eight, Khyentse Rinpoche spent many years with Dzongsar Khyentse Chokyi Lodro. After receiving from Khyentse Chokyi Lodro the many empowerments of the Rinchen Terdzo (the collection of Revealed Treasures or termas), Dilgo Khyentse requested to spend the rest of his life in solitary meditation. But Khyentse Chokyi Lodro’s answer was: «The time has come for you to teach and transmit to others the countless precious teachings you have received.»

By followers of Tibetan Buddhism he is regarded as having been a great teacher of teachers, a realized being, who was also remarked upon as being a genuinely good human being. His entire life was devoted to the preservation and dissemination of the Buddha Dharma and he is still regarded with awe and amazement throughout the Tibetan diaspora, and western centers of Tibetan Buddhism. His importance within the Nyingma school in the 20th century was all-pervading. He was one of the few Tibetan Lamas accorded the honorific title of » His Holiness». Following the death of Dudjom Rinpoche in 1987, he became the head of the Nyingma School, and remained so until his own death in Bhutan on 28 September 1991.