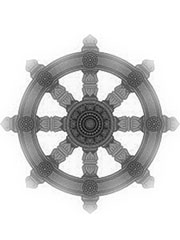 In the dharmic religions (Hinduism, Buddhism and Jainism), the wheel of life (also called by a variety of other names; see the Names section below) is a mandala or symbolic representation of samsara, the continuous cycle of birth, life, death. One is liberated from this endless cycle of rebirth when bodhi, enlightenment, nirvana, moksha, or samadhi is reached.

There are two primary forms of the wheel of life. The more elaborate form is usually six-spoked, though it is sometimes five-spoked. The simpler form, primarily used in Buddhism, is eight-spoked.

In computer software Unicode, the wheel of life is called the «wheel of dharma» and found in the eight-spoked form. It is represented as U+2638 (☸).

Names of the wheel of life

The most common name is the «wheel of life», but the wheel also has a variety of other names:

The symbol is also known as chakra from the Sanskrit word for wheel (not to be confused with the Hindu use of the same word to refer to energy nodes in the body— cf. chakra). The wheel of life is specifically known as bhavachakra or dharmachakra (the wheel of dharma).

The six-spoked wheel of life

The more elaborate form of the wheel of life has six spokes (or sometimes five, as described in more detail below) and is used in all the dharmic religions.

The wheel of life is represented as being held by the jaws, hands, and feet of a fearsome figure who turns the wheel. The exact identity of the figure varies. A common choice for the figure is Yama, the god of death.

The outer rim of the wheel is divided into twelve sections and given such names as the Twelve Interdependent Causes and Effects or the Twelve Links of Causality.

Ignorance is the first of the 12 causes and conditions, both of our rebirth and of maturing any karma within our dependent existence. Different causes can overlap in different stages and even mature in next existences — lives. Yet the turning of the wheel goes onward.

The six spokes divide the wheel into six sections which represent the Six Worlds (or Realms) of Existence. These Six Worlds are:

In Buddhist representations of the wheel, within each of the Six Realms, there is always at least one buddha or bodhisattva depicted, trying to help souls find their way to nirvana.

In the hub, the center of the wheel, a pig, snake, and rooster turn in a circle, each biting the tail of the next animal. The pig represents greed, desire, or attachment. The snake represents hatred and envy. The rooster represents ignorance or delusion. These are the evils which are responsible for the trapping of souls within the Six Realms.

The eight-spoked wheel in Buddhism

The simpler form of the wheel of life has eight spokes and is primarily used only in Buddhism rather than in all the dharmic religions.

The eight spokes represent the Noble Eightfold Path of Buddhism. They are said to have sharp edges to cut through ignorance.

Other symbolisms in the eight-spoked wheel of life in Buddhism:

The wheel in Tibetan Buddhism

The wheel of life is one of the eight auspicious symbols of Tibetan Buddhism.

The Doctrine of Three Wheels is Buddha’s teaching that the dharma wheel must turn three times for a student to understand the dharma: once for hearing, again for understanding, and finally for internalizing.

Tantric (Vajrayana) Buddhists also use the term «turning of the dharma wheel» to refer to the progressive development of Buddhism which culminates in their school. According to this image:

Other Wheels of Life

In Vigelandsparken in Oslo, Norway, there is also a sculpture with the name Wheel of Life (Livshjulet).